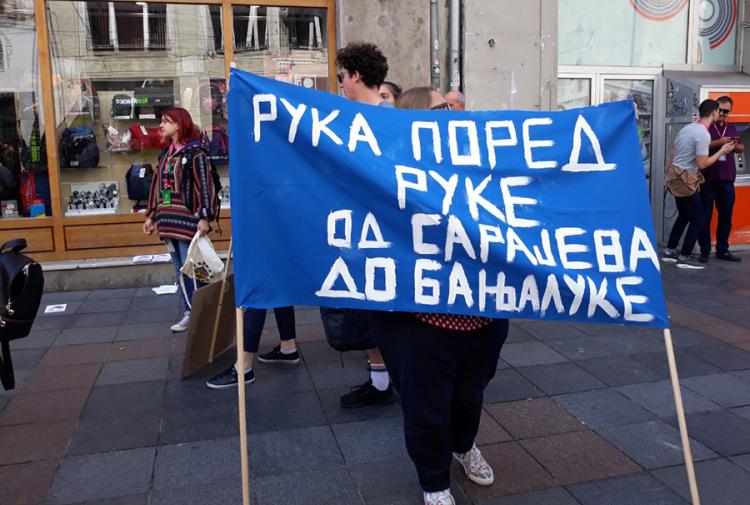 The first Pride Parade in Bosnia and Herzegovina, which took place on September 8 last year, has given hope that even in this country, attempts towards more freedom for LGBTI people are being made. Unfortunately, though, it turns out that there is no space for enthusiasm, except taking pleasure in the fact that the event had occurred without any incidents. Bosnia and Herzegovina has not improved anything regarding the matter, especially on an institutional level. Homophobia is the one that is actually uniting this ethnically and politically divided society. However, some differences do exist. What was possible in Sarajevo is still unthinkable in Banja Luka or Mostar.

Banja Luka, the second largest city in Bosnia and Herzegovina and the administrative center of one of BiH’s entities, is quite a homophobic community. It’s a place where even just the term “LGBTI” can be heard in a negative context, let alone anything else. The only other thing you can hear about the LGBTI community in this place is if a hate crime towards someone different is committed and someone does a sensationalistic news report about it.

Activists claim that this is a consequence of the general atmosphere of society in this BiH entity – a society which is “colored” with very conservative and right wing “colors”, harshly excluding anyone or anything different from its majority.

The majority exists just like politics dictate, with a strong support from the church, the same church that is playing a very important role in this “only formally secular” society.

It is devastating that there isn’t a political option in the entity parliament of Republic of Srpska that would be ready to publicly support LGBTI persons and fight for their rights.

A great testimony to how politicians “keep fueling homophobia’s fire” is this recent and bizarre example where members of the National Assembly of Republic of Srpska began offending each other by calling each other “gay”. Apparently, in this case, the term “gay” presumably represents the most offensive thing to call your opponent. Regarding these matters, politics in the RS government are “fully united in their Serbian unity” when it comes to the topic of LGBTI. The governing party and the opposition have the same opinions regarding this subject matter.

Something that should concern us even more is the fact that negative opinions are also coming from younger politicians, precisely the people who you would usually expect to have a more open-minded opinion.

Young assembly member from opposing party PDP in the entity parliament Draško Stanivuković has been explicit when it comes to this matter: “I don’t see the point of organizing a Pride Parade in Banja Luka, not even in the next hundred years.”

At an earlier point in time, he had also publicly commented that “these are not values we are supposed to promote in public squares, within centers of our cities and during a time when our population growth has been in decline for decades”.

An expert opinion on the influence of Pride Parade on population growth hasn’t been offered by anyone yet and Stanivuković isn’t alone in having such an opinion. We can also hear similar points of view from right wing and clerical circles, who, by default, like to confront anything that is even slightly different from the general opinion of the community from which they come from.

Regardless of a more “bended” point of view, even assembly member from the governing SNSD party Srđan Mazalica shares the same “values” with his opposing colleague.

With this said, he sees giving public attention to sexual minority problems within the boundaries of rights to public gatherings. “Regarding the support in context of organizing a gathering, according to the law on freedoms of public gathering, anyone has the right to ask for a public gathering permit from MUP (Ministry of Internal Affairs), in accordance with regulations. As a legalist and as a person who has brought some of these laws to the table, from this point of view I would also support any nonviolent gathering and any gathering that isn’t a security threat, a threat to some other things and from this point of view, it’s ok.” Mazalica stated.

If the Pride Parade even actually happened in Banja Luka, he certainly would not support it by attending it personally, because, as he says, he isn’t “a person of that sexual orientation”. “I wouldn’t participate in such a gathering. I do not participate in such gatherings because I am not of that sexual orientation; why would I be at this gathering, do they need support from someone who isn’t of their orientation?” Mazalica asks himself.

Support from politicians is exactly what all neglected minorities are in need of, therefore this community also needs this kind of support and this is what analysts have concluded.

We live in a patriarchal society which is deeply stagnating regarding civilizational values and quite lagging behind a democratically developed world. The civil sector is broken up and too weak to change such pregleda. The problems are mainly located in our education, the media’s lack of professionalism, the church’s strong influence on society, but most of the responsibility is being held by politicians – populists. If they were to send clear messages, the chances of us changing our society’s pregleda would be quite greater.

Activist and journalist Gordana Katana claims that politicians are not only unwilling to change things, but are actively creating an atmosphere of xenophobia and exclusivity towards anything that is different than the majority of our society.

“Politicians are creating this situation. Unfortunately, I also do not have a very high opinion of citizens at all and I think that they are easily manipulated. So, if Mister Dodik came out publicly tomorrow, Špirić, or someone else who is part of that government, and stated that ‘gay is okay’, everybody who is yelling ‘boo faggots, kill the faggot’ and so on today, would suddenly also start saying that being gay is okay.”

She also believes that the opposition isn’t to be given lesser responsibilities, who would find space even in such a situation for their manipulations. However, neither the opposition or the current government would gain or lose any political points for this. Simply put, their flirting with such quasi-clerics and quasi-conservatives is placing us in the situation we find ourselves every day.

For NGO “Oštra nula” activist Milica Pralica, there is no dilemma that in RS, “the shaft of evil”, made out of politicians, the Serbian Orthodox Church and our educational system, is currently dominating our scene regarding human rights.

“However, on the other hand, we can see that even citizens don’t want to fight it. People are leaving. They aren’t leaving because there aren’t any jobs here or because they can’t work. They are leaving because we don’t have anything alternative here, no alternative options are being offered to us. These people who are still fighting for something alternative are spent. There are young people who want change. I’m not just talking about the fight for equality regarding LGBTI people, but a general fight for changing such a system of values. However, such people reach a boiling point at some point and say ‘and this is enough, I’m moving on’! In this place, people who try to make a crack in the wall and openly speak about something end up being stigmatized. This is why they are leaving.”

A consequence of this is such an atmosphere that LGBTI individuals don’t even dare to report violence. They are afraid that if they do so, they will be judged by society and even their own families.

Activists admit that the civil sector can only be of very little influence, very little.

Precisely the minority community, in this case, the LGBTI community, could actually change something, but only if such a minority were allowed to function properly. In Banja Luka, this community functions “underground”, for now. This is, unfortunately, the correct image of “democratic values in this entity”.

Therefore, if we take a look at how things stand right now, Pride Parade is not happening in Banja Luka for now, at least not until the majority of our society realizes that minorities aren’t the ones to blame for the very bad state in our society. The blame should be placed precisely on the people who are creating such a dark atmosphere. However, it is key for the majority, who live here in a difficult economic situation and hopelessness, to realize that things will not become better until it is better for everyone.