Vlasenica square and monument, another million to "Zvornikputevi" with a dubious tender 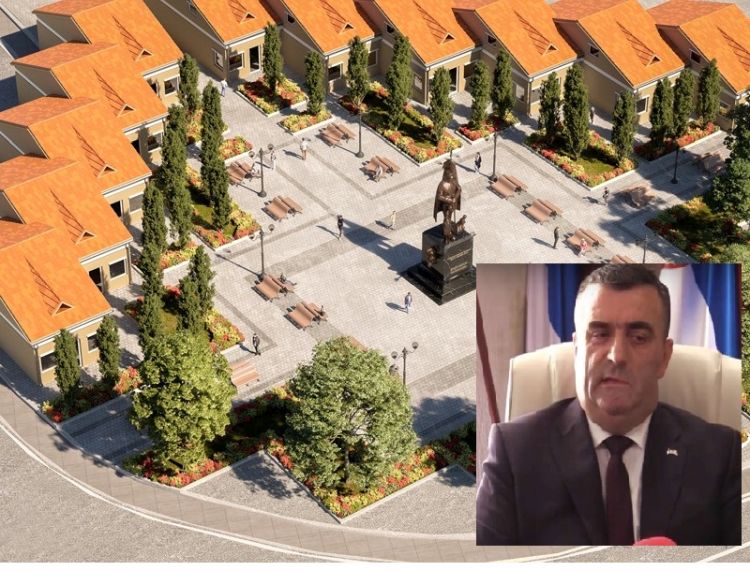 Mayor Miroslav Kraljević and the conceptual design of the square in Vlasenica/ Photo: vlasenica 24, ATV

The only question is whether the good business and political connections of Sava Erić, the owner of this company, which has been a long-time favourite of public procurement in the Zvornik region, have been decisive this time again. In 2010, Erić was denied the mandate of a deputy in the Parliament of Bosnia and Herzegovina precisely because of a conflict of interest.

That the mayor of Vlasenica, Miroslav Kraljević, was in a hurry to award this job to Erić's company is clear from the maximally shortened deadlines through public procurement procedures.

From earthworks to works of art

The notice on public procurement, which was published on December 28 last year, stated January 17 as the deadline for receiving the tender documents, while January 18 was the deadline for submitting bids. The very next day, January 19, Mayor Kraljević signed the Decision on the selection of the most favourable bidder.

If you bear in mind that in the municipality of Vlasenica between December 28 and January 17, due to national and religious holidays, there was more celebration than work, it is no wonder that only one offer was received for the tender.

However, this is not the only reason why "Zvornikputevi" had no competitors. 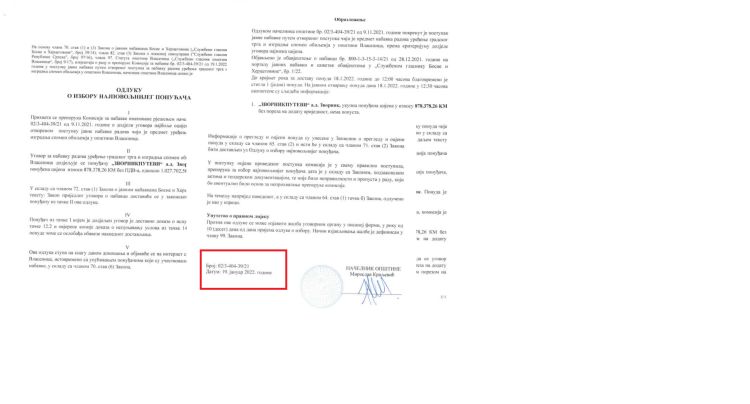 In addition to regularly receiving lucrative roads for the construction and reconstruction of road infrastructure in the municipalities and cities of the Birač region, "Zvornikputevi", judging by the work assigned to them by the municipality of Vlasenica, also started to deal with artistic works.

It sounds incredible that this company was entrusted with work that includes, among other things, sculpting and foundry work.

As can be seen from the form, it is about: "Sculpting and casting of a bronze composition of a monument of 7 members in all according to the instructions of the artist".

Of course, a subcontractor was hired for this job. The casting of the monument, the author of which is the sculptor Kirl Mukaetov, is carried out in the "Janković" foundry in Smederevo. At least that's what was said at the ceremony marking the beginning of the works in Vlasenica.

However, it is disputed that in the Notice on the award of the contract, dated February 22 of this year, it was stated that there will be no subcontracting.

The tender documentation states, among other things: That in the case of subcontracting, the bidder must indicate in the offer which part of the contract he will give to the subcontractor.

Given that the Contract Award Notice is published after the bid has been considered and the most favourable bidder has been selected, it can be concluded that "Zvornikputevi" did not specify in the bid whether and which part they will give to the subcontractor.

If there was a reason for the bidder and the contracting authority to "hide" the subcontract with the Smederevo foundry, and everything points to the fact that it was, then this is another and a major example of a violation of the law.

It is logical that other potential bidders were limited, in case they do not have a pre-arranged deal with a foundry that can cast the monument. There are very few such foundries in the area.

Judging by the available documentation, at the time when they submitted their offer, they did not have such a foundry at their disposal even in "Zvornikputevi". Which is probably the reason why they didn't even list it in the offer.

Unlike other bidders who did not even dare to apply for the tender, they still "played it safe". This is also indicated by the fact that they submitted an offer in the amount of 878,378.26 KM, which is about 600 KM less than the estimated value of the work. 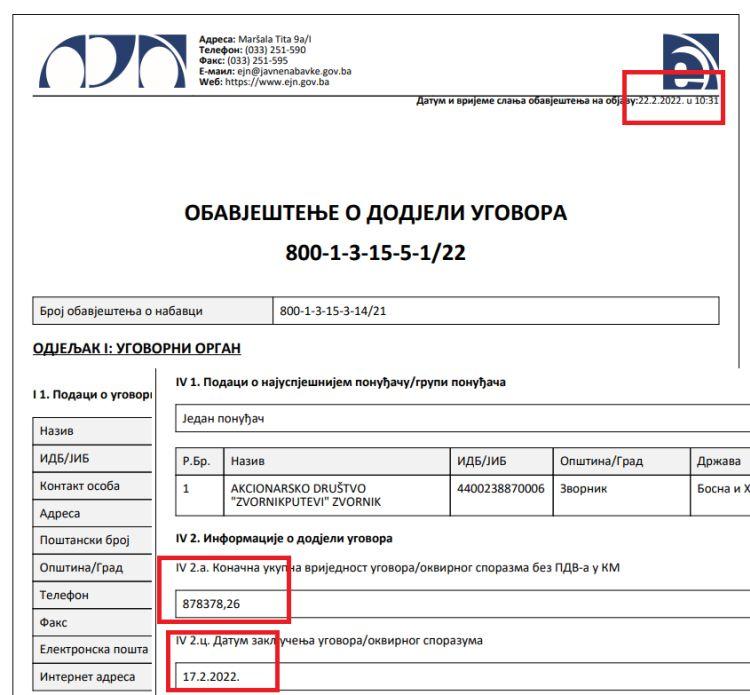 A tender to desire

The tender conditions also favoured Sava Erić's company. Thus, the bidder is required to have an asphalt base that is not more than 100 kilometres away from the location of the works. Regardless of the technical justification of this condition, it is clear that it eliminates any competition with "Zvornikputevi" in that region, where asphalt bases are not very common.

Among the conditions, it is stated, among other things, that the bidder must own an excavator, two tipper trucks and a roller with a minimum weight of four tons.

In Transparency International BiH, they say that it is not illegal that the speaking body has set certain technical conditions, the only question is how well they are professionally justified. On the other hand, reducing the deadlines of the public procurement procedure may favour one bidder.

"In this case, the terms were shortened to the minimum allowed by law. However, shortening the deadlines can be questionable because in this way the possibility to achieve active and fair competition is denied. Competition is certainly limited by shorter terms", according to TI BiH.

In addition, in this particular case, it is intriguing that there was such a rush to choose the most favourable bidder that the contract was signed back in February, and the works only started on July 26 of this year. 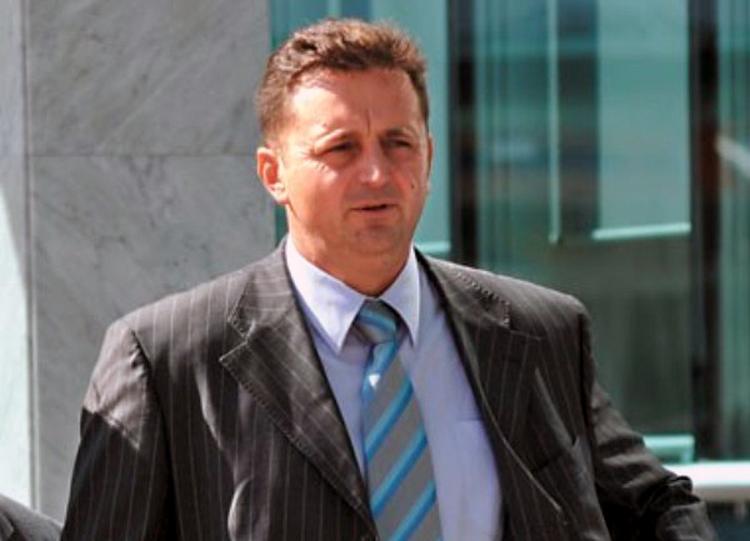 Everything indicates that the job was assigned to Zvornikputevi even before the funds for this project were secured.

This is confirmed by Chief Kraljvić himself, who stated during the ceremonial start of the works at the end of July that he addressed the Prime Minister, the President of the RS, and Milorad Dodik, a member of the BiH Presidency, until the Government finally approved the funds.

In any case, "Zvornikputevi" are not the ones who have reason to be afraid of competition when it comes to tenders. As the director of this company, Jelenko Vasić, once publicly boasted, that 99% of "Zvornikputeva" jobs are sold through public procurement. 4 years ago, Žurnal wrote about how this company gets jobs that are financed from the Budget, even though they were prosecuted for tax evasion. In 2019, the Appellate Panel of the Court of Bosnia and Herzegovina sentenced Director Vasić to one year in prison and a fine of 15,000 KM. 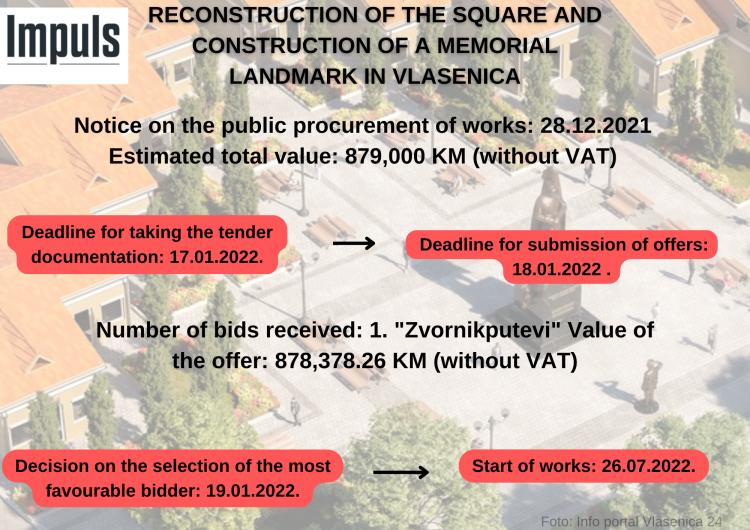 PrevNext
Public procurement in Laktaši: There is always work for tender favourites

Ponedjeljak, 30 Januar 2023 13:56
Forum
FOURTH YEAR OF THE KVANJ BUNA TENDER The Chinese from Pelješac Bridge in the race for the Kvanj-Buna job

Ponedjeljak, 30 Januar 2023 13:37
Forum
The former mayor of Bratunac illegally granted his son-in-law a lease of land for 20 years, criminal charges are pouring...