REBELLION IN FREE ZONE Workers are vomiting, locals signing a petition, Unbearable stench spreads through Sokol due to the sterilization of medical waste 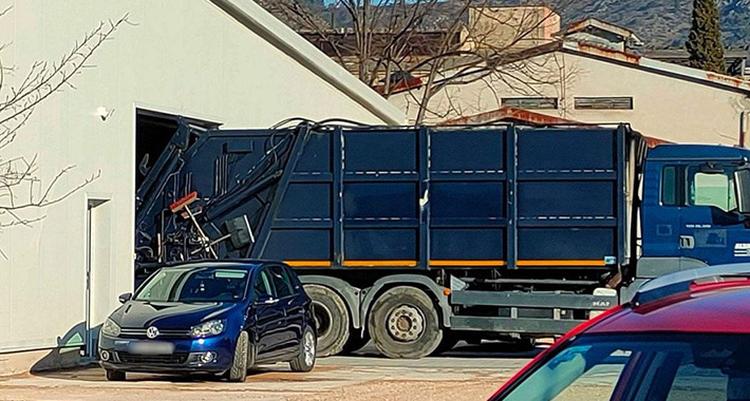 "Considering that the company MVVM d.o.o. operates on the site of the Free Zone Herzegovina Mostar, which is located in the local community Rodoč and in the immediate vicinity of the local community Jasenica and not far from the river Jasenica, which owns a facility at this site which is being used for the treatment of medical waste. We are of the opinion that there are no technical, technological, environmental or all other conditions for such actions to be performed at this site. We are also convinced that the facility is not equipped with any equipment that could minimally prevent unwanted consequences. We are also of the opinion that the facility or company does not have a use permit for such actions. Such actions and irresponsible behaviour endanger the environment, which is less important than endangering the lives and health of locals and people who move in the immediate vicinity ", is written in the request from Rodoč Local Community, Jasenica Local Community, Bartol Kašić Elementary School, Stanislav Baja Kraljević Barracks, University in Mostar, and catering facilities around the former Sokol, as well as businessmen operating within it.

In their request to the city administration, they write that they submit the request for several, specifically 5 reasons. The first is location.

“Close proximity to existing companies, which employ a large number of employees. The second, the unbearable stench in the process of sterilization, and the third the very properties of hazardous waste - harmfulness, toxicity, carcinogenicity and infectivity. And the fourth is that hazardous medical waste consists of pathological waste, human body parts, amputees, tissues, organs removed during surgery, tissues taken in diagnostic purposes, materials and accessories used during medical interventions… ”, they state further in the request. They also point out the risks associated with inappropriate waste disposal, such as unfair disposal and contamination of drinking water. Legal entities from the Rodoča area have been joined by individuals, and we already have about two hundred individuals, individuals who have signed their name, surname and ID number that they do not want this company in their vicinity. The collection of signatures continues under the auspices of the "Petition - collection of signatures for the ban on the destruction of medical waste in Rodoč.

From the company MVVM, which, according to the register of business entities in BiH, the founders are Dalibor Buhač, Valentina Jerkić and Kata Leko, who is also in the role of director, say that everything is according to regulations. We sent them an inquiry about waste disposal and negative reactions from Rodočani locals on Thursday, they promised an answer on Monday (today).

Despite about twenty signed legal entities, including public institutions and even the Indirect Taxation Authority, the MVVM claim that all this is due to the dissatisfaction of one neighbor.

“At the very beginning, we need one correction! Namely, the company MVVM does not deal with the incineration of any waste. We have been located within the Sokol industrial zone since 2018, and we moved to a new hall within Sokol a few months ago. From 2018 until today, there have been no objections to the work of the company MVVM, but we’ve found out that we are bothering one neighbour, primarily because of property and legal relations. These are plots that border each other. We justifiably suspect that he was the one who launched this campaign about the alleged endangerment of the environment. Unfortunately, we also received a clear threat that the media will be (mis)used for the purpose of developing a negative image of the company and relocating it. We repeat that from 2018 until today, nothing bothered anyone, and our work is always transparent, primarily subject to the public interest ", says Kata Leko in response, on behalf of the MVVM Management.

He claims that they had a meeting with MZ Rodoč where they introduced the locals to the work and method of waste sterilization.

“During the meeting, the locals realized that within our company, waste is exclusively processed/sterilized. Then we invited them to a practical tour of the plant to see on the spot the safety of the process. In addition, we have visits from our clients who are extremely satisfied with the way our sterilizer works ", claim the MVVM.

Asked if inspectors came to the company, they said they had inspections from several services. Asked what kind of waste is in question and whether it has a detrimental effect on locals, they say no.

"We do not own an incinerator but a sterilizer. Working on a waste sterilizer is harmless. A sterilizer is a machine that sterilizes waste by dry sterilization. Sterilizers of various sizes/applications are used i
on the farms. We have a sterilizer with a larger working volume and through proper work on the sterilizer, there is no harmful impact on the environment. Each processing cycle is recorded and documented for internal and external controls, ”they say. On inquires about unpleasant odours, they say that it does not exist, that it is similar to the one at the dentist office.

"We have a waste sterilizer that is used in all cities in the region and that sterilizes waste in a way allowed by the EU. Croatia, for example, has over 30 such sterilizers. There are currently about 10 sterilizers in BiH. They are in Banja Luka, Sarajevo, Tuzla, Zenica, Doboj, etc. Locations of such sterilizers are in industrial zones, residential areas, hospitals, health centres, clinics. There is no unpleasant odour during the sterilization process, perhaps the most similar odour is the one when visiting a dentist, and only with the sterilizer. Unfortunately, we have to emphasize that the unpleasant smell is obviously felt only by the neighbour who started this media campaign ", claim the MVVM.

However, the people of Rodočani would not agree with the statement that the stench is not to be felt, as well as the businessmen who are trying to work in the immediate vicinity.
"All the companies have signed, it's a horror. It is not only that it stinks, but also is headache and vomit-inducing", says the owner of the company Ditrix, Ivica Drežnjak, who is just one of the signatories of the request for this company in Rodoč to stop working. Drežnjak says that people from MVVM, in addition to the claims that they do not produce a bad stench, claim that they do not wash the containers, but they do wash them, and the water spills over the fields of locals.

"It stinks, my head hurts. People do not want to enter the company for work. We talked to the owner Leko, he says it's not like that, you have turned on me. Man, come downstairs, and stay here for a while, and you'll see. That job has no place among businesses and in the settlement ", Drežnjak thinks. In addition to him, several other locals called us. They claim that they called the police because of everything and that apart from the stench from that company in Rodoč, everyone sets fire to whatever they please, that this is a place from which they will have to flee.

In the end, despite the handwritten signatures of locals, companies, schools, the MVVM asks "whether this media campaign was ordered directly or indirectly from their neighbour, especially due to the fact that since 2018 they perform flawlessly in Sokol and have not bothered anyone ”.

The same director was asked about the connection between MVVM and AX Soling, since, according to neighbours, AX Soling built a hall where medical waste is disposed of under the pretext that it is a warehouse, she answered that it was a supplier to whom she forwarded the inquiry.

“AX Soling is one of our suppliers. We have conveyed your inquiry to the management of AX-Soling. We were told that they had never built incinerators or warehouses nor were they registered for the said activity. AX-Soling is a tool shop and does not deal with the construction ", says Kata Leko about AX Soling, as if they are people she only knows very well in business, and not her husband. We told her that we are not exactly a restaurant for someone to order texts from here and that it was certainly not a problem for her to pass on the inquiry to AX Soling, since he is her husband.

By the way, MVVM was among the party incentives when we wrote to whom all stork brought good money.

From the Administrative Fund for Environmental Protection of the Federation of BiH at the suggestion of the director at the last session in 2020, MVVM doo Mostar came up with a project to expand existing capacities for medical waste in Herzegovina in the amount of up to 90,000KM. They were immediately recognized by the director of SKB, who entrusted them with waste disposal, and at the end of 2020, they received 663,390KM for year-round waste disposal.

Asked about the requests of the locals for inspection, the city inspection says that they will comment on the same after going out on the field.
The Federal Ministry of Environment and Tourism says that this company has all the permits.

The Federal Ministry of Environment and Tourism has issued a Decision on the environmental permit UPI-05 / 2-23-11-88 / 18 dated 26 June 2018 to the investor MVVM doo Mostar, for collection, transport, temporary storage, treatment and treatment of potentially infectious and of infectious medical waste in the industrial zone Bišće Polje bb in Mostar at the location Rodoč bb - Free Zone Herzegovina, In the immediate vicinity of the location there are no residential buildings, the whole location is located in the area of so-called. '' southern industrial zone ", they said, adding that the treatment of infectious medical waste is sterilization, not incineration.

However, what we convinced ourselves is that the unbearable stench spreads through the Rodoča and the inhabited part, especially in front of the houses on the hill, especially in the evening and when there is no wind. The truth is one, unsolicited, and it stinks, it stinks terribly. The locals are asking for the inspection to come at night, and they add that it is then that the real processes take place in the MVVM, and that is when it stinks the most.

CONFLICT WHO IS IT, INTEREST WHAT IS IT They are in the Mejlis, Lottery, Elektroprivreda and Autoceste, and they also...

THE BEAUTY OF VICES: Đajić, Čomić, Petrović and Aljović on the electoral lists, although in a conflict of interest