Serbia stepped over the Pavlović Bridge and entered Bosnia and Herzegovina: The toll collection is valid until 2025?! 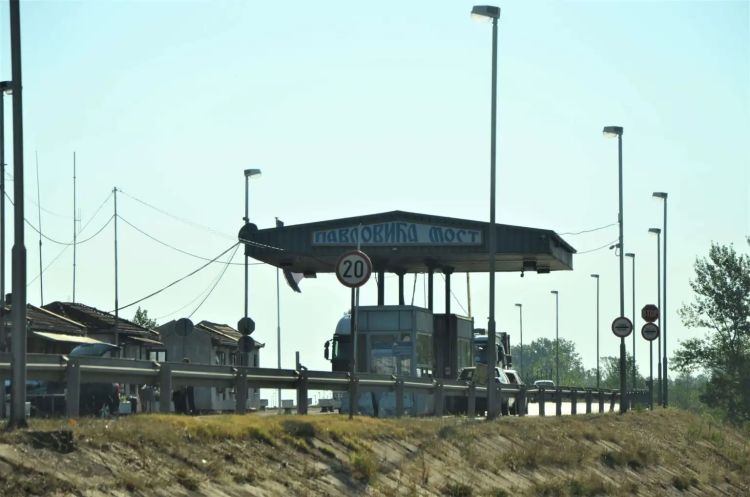 The construction of the Pavlović bridge is among the first examples of public-private partnerships in Serbia after the Law on Concessions was passed. On the basis of this law, the Government of Serbia concluded a concession contract for the construction of a bridge on the Drina between Serbia and Bosnia and Herzegovina for a period of 30 years with a non-resident from the USA (Chicago), and through the company Drina River Bridge Corporation A.D. The contract expires in 2025, and until then the company Drina River Bridge Corporation A.D. has the right to charge the bridge toll in the amount determined by the Government of Serbia.

Self-proclaimed Serbian benefactors Slobodan and Mira Pavlović started the construction of a bridge over the Drina River in the early 1990s with the aim of connecting the people of Semberija (BiH) and Mačva (Serbia).

After the signing of the Dayton Peace Agreement, the construction of the Pavlović Bridge was completed in 1996. The bridge became a border crossing between two independent and sovereign states – Bosnia and Herzegovina and Serbia, but also the only bridge on the border/s where tolls have been charged for decades. In 1996, Pavlović also laid the foundation stone for the construction of the new town of Slobomir, in the immediate vicinity of the Pavlović Bridge, where Slobomir P University and Slobomir Radio and Television are located today.

According to the available documentation, the Pavlović bridge is managed by the company Drina River Bridge Corporation A.D. with headquarters in Belgrade, and at one time there was also a branch in the village of Popovi near Bijeljina (BiH). For a company that has multimillion-dollar revenues every year, it is indicative that none of the available phone numbers are active, which fuels doubts about the transparency of the work they do and the money that flows into who knows whose pockets.

According to the available data, the construction of the “philanthropist” bridge of Slobodan and Miro Pavlović cost about 4.2 million US dollars, and the collection of tolls for all these years, according to rough estimates, collected tens, perhaps even hundreds of millions of KM.

By looking at the basic data of the Drina River Bridge Corporation Akcionarsko društvo Beograd (Novi Beograd), Miroslava Pavlović was registered as the owner, on two bases with a share of 60.95 per cent and 34.37 per cent, and Nenad Glišić with 0.57 per cent of the capital. According to the same documentation, the representative of the company is Radomir Jovanović (director), while the procurators are Mile Pavlović and Vanja Ćosović. It was also stated that the company was founded on June 25, 1991.

The construction of the Pavlović bridge/bridge is among the first examples of public-private partnership in Serbia, and after the Law on Concessions was passed. On the basis of this law, the Government of Serbia concluded a concession contract for the construction of a bridge on the Drina between Badovinac (Serbia) and Popov (BiH) with a non-resident from the USA (Chicago), and through the company Drina River Bridge Corporation A.D., for a period of 30 years. 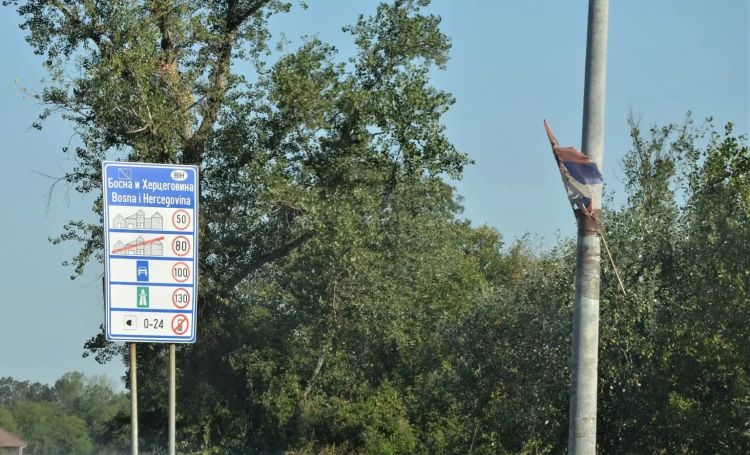 And where is BiH in all of this? (Photo: E. Skokić)

On the day of mutual recognition of BiH and Serbia, the border between the two countries was identified in the middle of the Drina river. Never after that have the Commission for the Borders of BiH and Serbia agreed and ratified the agreement on the border. Although there were hints that after the ten-year abstinence, the members of the aforementioned commissions would sit down at the negotiating table again, this did not happen. The Serbian Border Commission has identified four disputed points near the Zvornik and Bajna Bašta hydropower plants and the Belgrade-Bar railway.

Disputed points in the region of Bogatić (Serbia) and Janja (BiH), due to the change in the course of the Drina Rive,r were not considered, which leaves room for, for example, illegal exploitation of gravel, smuggling of oil derivatives and high-excise goods and other forms of crime.

And while Serbia has largely overrun the Drina and crossed over to the left bank right at the Pavlović bridge, the residents of Janja, ten kilometres away, can only look at their properties in Serbia. From a cadastral point of view, the land belongs to the City of Bijeljina/Janja, but de-facto, according to international regulations, it is located in Serbia, because the border between the two countries is currently established in that area in the middle course of the Drina river. 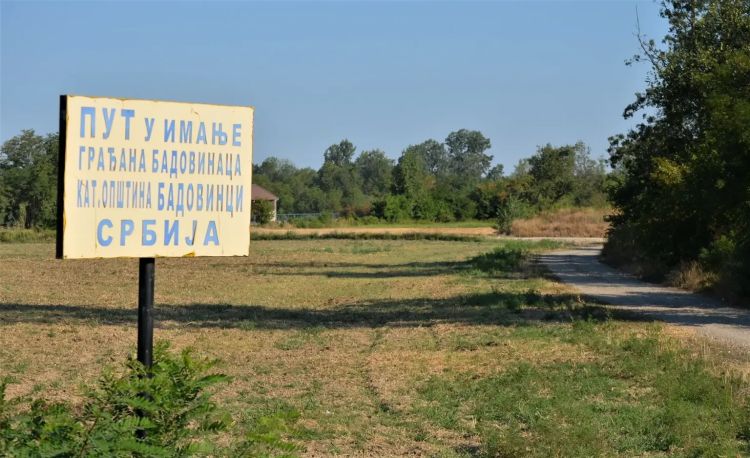 On the other hand, the residents of Badovinac immediately after the Pavlovic bridge placed a sign with the inscription: “The way to the property of the citizens of Badovinac. Cadastral municipality of Badovinci – Serbia” and, of course, on the left bank of the Drina.

The circumstances of “no man’s land” or the unrefined border agreement are used for different purposes, and the Pavlović bridge, which was built under the guise of connecting Semberija and Mačva, fits perfectly into the mosaic of lawlessness. And everyone is silent about it. In BiH, there is no reaction at all to the fact that Serbia ran over the Drina and that a board with the inscription “Srbija” was placed on the left bank. At the same time, in Serbia, they are wisely silent and the land around the Pavlović bridge, that is, the Drina river, is used for the exploitation of gravel and the destruction of the river bed, which is why floods threaten the surrounding villages.

Ordinary citizens resent it. That’s why they created a Facebook group with the name: “Stop collecting bridge tolls on the Pavlović bridge”, but there was no effect. 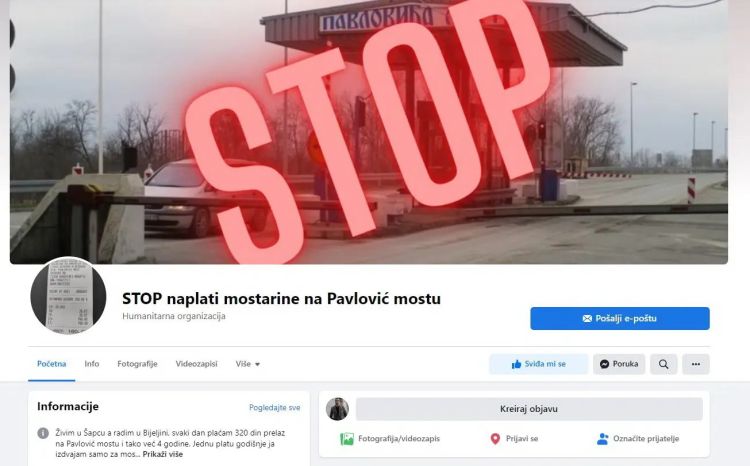 We contacted the administrator of the group, who wrote on Facebook: “I live in Šabac and work in Bijeljina, every day I pay 320 dinars (5.3 KM) to cross the Pavlović Bridge and have been doing so for 4 years. I set aside one salary per year just for the bridge. I am asking you to persevere together and abolish this tribute!”.

“According to the data of the State Border Service of Bosnia and Herzegovina, 27,355 cars, 3,820 trucks and 484 buses crossed the Pavlović Bridge in one month. According to the valid price list, the company “Drina River Bridge”, which manages this bridge, earned about 140,000 KM in just one month on bridge tolls,” he wrote.

We tried to verify his allegations at the company Drina River Bridge Corporation A.D., based in Belgrade, but, as we have already written, their phones are not working.

Slobodan Pavlović died in a traffic accident in Chicago at the end of 2021. Before the fatal traffic accident, Pavlović’s empire began to crumble. They privatized Bijelji’s “Žitopromet”, but without success. “Pavlović Bank” also failed, and currently Slobomir P University, radio, and television are active…

Until 2025, the Drina River Bridge company will collect tolls on the Pavlović Bridge, and then the building of Slobodan and Mira Pavlović will pass into the hands of the Republic of Serbia. What will happen to the land and the access roads in and around the bridge, whether an agreement will be reached on the border and the border zone, is difficult to predict, but without international arbitration, it is difficult to expect that the Commissions for the Borders of BiH and Serbia will agree on the disputed points, among which is also the Pavlović Bridge.

Utorak, 06 Septembar 2022 10:22
Impuls istražuje
Vlasenica square and monument, another million to "Zvornikputevi" with a dubious tender

PrevNext
CONFLICT WHO IS IT, INTEREST WHAT IS IT They are in the Mejlis, Lottery, Elektroprivreda and Autoceste, and they also...

THE BEAUTY OF VICES: Đajić, Čomić, Petrović and Aljović on the electoral lists, although in a conflict of interest

They are on the lists again: Mitrović, Bijedić, Nešić and Brdar did not separate the private from the public

Petak, 30 Septembar 2022 14:05
Forum
CONFLICT WHO IS IT, INTEREST WHAT IS IT They are in the Mejlis, Lottery, Elektroprivreda and Autoceste, and they also...